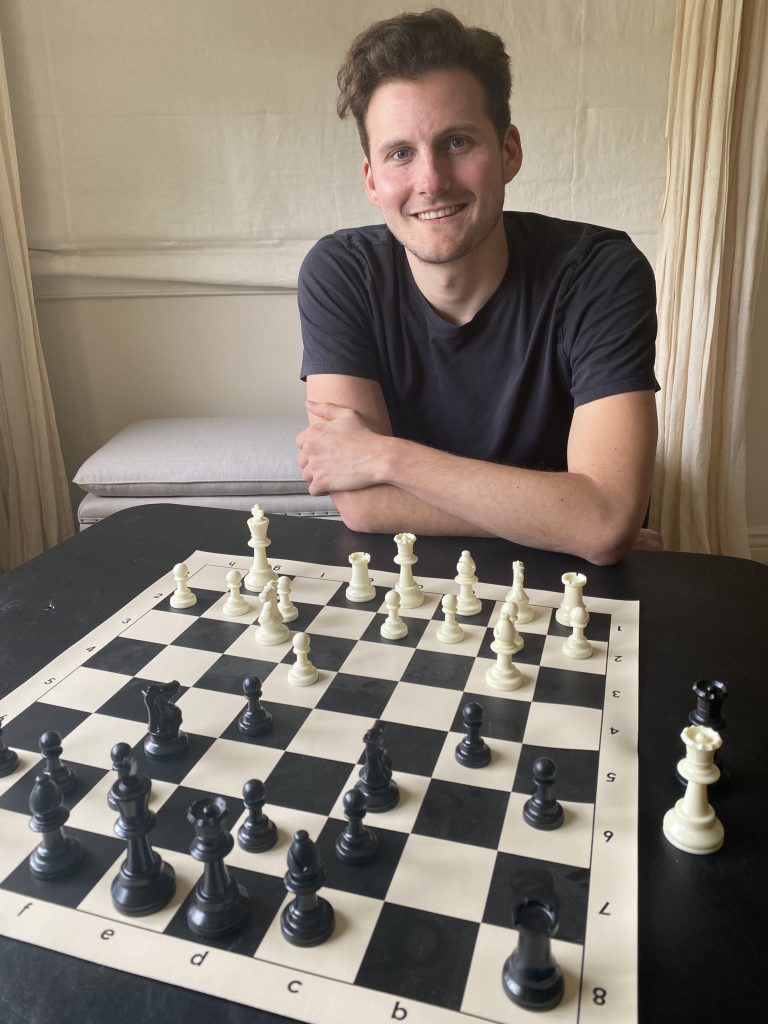 “I got into chess when I was in grade two. Of course, I already played at home – my dad is Russian. But I vividly remember sitting in a particular room in Palmerston Public School and learning chess from Ted. That would have been back in 1998. Maybe it’s the structure of learning something outside your family, but that’s when it went from being just a game you can play to something more for me.

There’s a culture around chess, it promotes a community feeling. I don’t think too many people go around thinking of themselves as a Monopoly player or whatever, but chess is different. It’s fulfilling, it defines people.

I remember enjoying the competition. I always liked challenging myself. I tried to be on every sports team and chess was another way for me to compete. Part of the reason chess is engaging is that you learn something, and you can apply it right away in a competition. Chess and math are similar in a lot of ways. I loved chess, but I hated math. I just didn’t see any value in math, but in chess, I wanted to learn more so I could win. Learning through play, right?

The whole thing came full circle when I became a chess teacher myself. I had been working at a publishing company, when by chance I talked to Rose, who was already a CIC instructor. I went to meet Ted at Annex Chess Club, and we talked as we played a game of chess. He introduced me to Tal, who interviewed me, and pretty soon I was back in schools as an instructor, including at Palmerston. So I still get to see that special room I vividly remember from grade two.

One of the most surprising things I’ve seen kids gain from chess is confidence. It’s not something I would have said before I started teaching chess. But I’ve seen it and I think it goes beyond the game. It can help kids with reading or taking on other tasks they might not have thought they were capable of.

I had been a camp counsellor before, but this was very different. Being a camp counsellor, you’re in your element and the kids come to you. Whereas walking into a school, you’re in their space, on their turf. One of the things I had to figure out was how to make it fun, but also teach effectively. At 23 I was still a kid myself, so I knew what they wanted from an after-school program – it was supposed to be a club, not a classroom. I made sure I wasn’t another one of their teachers, I wasn’t part of that group. But at the same time if I was too relaxed, they wouldn’t learn. So I had to find that balance.

Teaching online now, it’s a different setting again. Maybe more of a shared space. And I’ve really enjoyed it. Using Lichess with our curriculum, it’s really well suited for online. I like the convenience of teaching from home, and I think we’ve all done a really good job of being engaging over these platforms. It really isn’t hard if you have a prepared lesson. And I always try to have fun myself – if I’m not enjoying it, they won’t either, right? So I always try to teach lessons that I’ll like going through myself.

I try to engage at their level, relate to what’s going on in their life. If I start talking about a sacrifice, they’re going to immediately think about killing an animal, like in a ritual – but I talk about a situation they would understand, where you give something up for some other kind of benefit, like maybe deciding to finish some homework, even if you really don’t feel like it at the time, so you can do something special on the weekend.

Kids learn a lot from chess when you make it relatable. Not only do they get more of an overarching understanding that way, but it’s actually easier to learn the chess skills. Most people enjoy things more when they can relate to it.

How I approach chess instruction varies by the age group, too. In my new youth group, it’s more open and discussion-based, and I don’t direct the conversation as much. But for younger groups, I have to be more of a teacher.

One of the most surprising things I’ve seen kids gain from chess is confidence. It’s not something I would have said before I started teaching chess. But I’ve seen it and I think it goes beyond the game. It can help kids with reading or taking on other tasks they might not have thought they were capable of. Partly it’s because when you start to play chess, there’s a social perception. Kids realize it’s an adult game, and something played by the smartest people in the world.

I remember when my own sister signed up for the Huron Chess Club with Michael Humphreys. At first, she didn’t want to get a checkmate. She thought it was rude or show-offy and she wasn’t comfortable with it. But she grew to understand that it’s not a bad thing to win. Part of what makes competition uncomfortable for some could be the physicality that often goes with it, or there could be a stigma particularly for girls, but chess allowed my sister to compete, to win, and to be a girl all at the same time.

Kids learn a lot from chess when you make it relatable. Not only do they get more of an overarching understanding that way, but it’s actually easier to learn the chess skills. Most people enjoy things more when they can relate to it.

One of the most memorable impacts I’ve seen from my own classes, there was a student who had just moved to Canada from Iran. She was partially deaf, and her English wasn’t great. So her mom signed her up for chess camp. I guess that was the last time we had in-person camp, the year before last. Ingrid and I were her counsellors. This student was really nervous at first and apprehensive, but she was eager to learn and she was good at chess. In the tournament at the end of that first week, she placed second or third. So that weekend, her mom signed her up for all the remaining weeks of camp.

Over those weeks, I saw her, a six- or seven-year-old, who didn’t know anyone – and who had a disability – I watched her enjoy herself and make friends. You don’t necessarily see the impact that fast, but that was memorable. Plus, it wasn’t all one-way. Her mom got me a nice Starbucks gift card at the end of camp. So, like we say in chess – some compensation.

In my own case, at this point in my life, I don’t lack confidence. I’m 6’4”, fairly athletic, so I have a natural presence. But when I was in grade two, I had no idea I was going to grow up to be this giant. So sure, if you happen to be a buff 12-year-old who’s good at hockey, maybe you have other ways to develop confidence, but I think with chess it’s a lot more available, it can reach a lot more people. And even in hockey, you’re not going to be able to compete against adults like you can in chess.

In terms of reaching a wide audience for chess, one thing that sets our organization apart is a really diverse group of instructors. Great teachers who have great lived experience and they bring a lot to their chess teaching. Not everyone is a chess master like Michael Humphreys, but then again not everyone has a career in theatre like Rose. And it really blends well with our life skills curriculum.

I always teach my students not to be anxious but to set yourself up for success. You can only do so much, you can only take care of what’s in front of you, but if you set yourself up well, then there’s more chance of a good outcome. So some people learn specific openings when they’re starting out in chess, like the Queen’s Gambit or the Sicilian Defence, but I tell my students not to worry about that at first. Just do the things that will set you up to have a good game. We teach the three C’s in the opening, it’s a sort of check list. Kind of like your morning routine – you get dressed so you’ll be comfortable, you have something to eat so you won’t be hungry and tired later, and so on.

I think two of the biggest life skills people get from our chess programs are patience and critical thinking. I probably would have been confident without chess, but I don’t think I would have been as patient and willing to just sit back and observe. It’s easy to be really reactionary when you start playing chess, but you quickly see how it fails you. So I really think that’s been one of the long-term benefits for me.