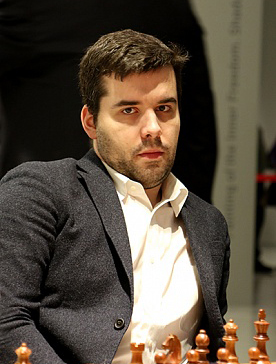 It has been said that playing one game of championship level chess is as physically exhausting as playing top-level tennis. After seven games, including a thrilling but absolutely draining 7 1/2 hour Game Six, today defending World Champion Magnus Carlsen and challenger Ian Nepomniachtchi squared off for Game Eight of the World Chess Championship. And the exhaustion of the players began to show.

Carlsen again with the white pieces played e4 and Nepo played into a Petrov Defence, as he has done earlier in the tournament. After the somewhat strange choice of 10 …Kf8, which avoided a trade of queens but left White with a better position, Nepo blundered a pawn with the move 21 …b5?

After this, it was all Magnus all the time. Nepo, realizing his error, seemed barely willing to sit at the board, even burning time on his own clock while his seat remained empty.

Magnus, on the other hand, remained at the board for the entirety of the remainder of the game, leaving only once or twice for brief periods. Knowing that he had a significant advantage, he methodically and calmly tried to find a way to convert this advantage to a win.

His opportunity came a few short moves later. On move 24 Nepo blundered again, allowing a series of simplifying exchanges which left the players with a queen and pawn endgame, but with Magnus up a pawn and with a definitely superior pawn structure.

By move 35 Magnus had managed to turn this small advantage into a crushing one, with four pawns against two, including two passed queenside pawns. The remainder of the game was an exercise in geometry with Magnus expertly defending his remaining pawns while Ian searched in vain for attacking chances and the hopes of setting up some kind of perpetual check. On move 39 Nepo had a significant advantage on the clock, and Magnus was down to about three minutes before meeting the time control on move forty, but Magnus was cool, calm and collected while Nepo was clearly dejected.

Finally, on move 46, Magnus outmaneuvered Black’s queen, forking the queen and Black’s remaining pawn, while simultaneously giving an x-ray defence of his b3 pawn. With this, all that Black had was a few more checks, and the prospect of having to try to defend against four passed pawns and mating threats. Understandably Nepomniachtchi did not have the heart for this kind of fight, and resigned the game.

Carlsen now leads the match five games to three. This significantly changes things for both players. Carlsen can relax very slightly, needing only 2.5 points in the remaining six games to secure a win. Nepo, on the other hand, will have to change his strategy and go on the offensive. To have any chance of winning the championship during the classical phase of the match, Nepo will need to win as Black at least once.

While many seem to think that Magnus’ victory is all but assured, we should remember that Nepomniachtchi is one of the finest chess players on earth. It would be foolhardy to count him out.

The players get a well-deserved rest day on Monday, one which both players admitted they could use. Play resumes on Tuesday December 7.